Komen By The Numbers: Education in Focus

As a woman, do you remember when you first became aware of the importance of being vigilant about your health? I'm forty years old now,  but I feel like I've always known.  I grew up in Australia, and went to high school in the 1980's where we had a very strong health and sex education curriculum.  I think this where I must have learned about checking for abnormalities in my breasts as well as the importance of regular cervical cancer screenings.  I also seem to recall my primary care doctor giving me a lesson on how to check my breasts and being a very good student, I listened and religiously checked myself and also went for my regular Pap tests. 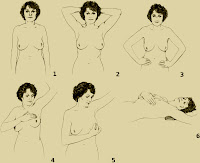 This knowledge served me well when I noticed, through self-examination, a difference in one of my breasts back in 2004 when I was thirty-three.  Not a lump; nothing really obvious; just different.  And that was when the real battle began.  Because I didn't have an obvious lump, presented no apparent risk factors and initial tests were inconclusive, I was waved away by my medical practitioner at the time and told to seek "breast massage" as a possible therapy for my imaginary problem.  (See my post "How Did I Get Here?" for the unbelievable story of my initial diagnosis).  After deciding that I would follow my intuition that something was wrong,  I sought a second opinion.  Well the rest, as they say, is history and here I am today at forty years old blogging about my experiences as a woman living with metastatic breast cancer.

I've often wondered though what led me to be so intuitive about my body?  Was it the health and sex education that I received in high school? Was it that good? Was it the doctor I had seen throughout my teens and early twenties who instilled in me this sense of vigilance? And what kind of medical education did that nurse practitioner receive, that led her to wave me away that day despite my protestations?  Me, a person who at the time had presented with StageIIIA breast cancer, despite absolutely no risk factors?

Yet public education is a popular mission for many of our  breast cancer charities.  If the goal is to educate, it's a relatively easy mission  to fulfill.  Produce educational resources - mission accomplished. But it's an expensive undertaking, even though it's not necessarily helping to reduce breast cancer incidence.

Continuing my series of investigations into the activities of our nation's largest breast cancer fundraiser, Susan G. Komen for the Cure® ("Komen"), in this post I shine the spotlight on Komen's Education program. (Previous posts in this series are available at "Komen By The Numbers" and "Komen By The Numbers: The Context of Research".) 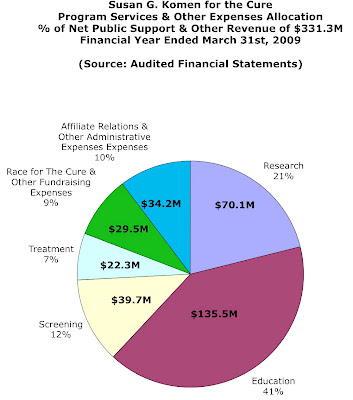 
"Research is just one piece of delivering cures for cancer. Education is critical: even today, many women don’t know they’re at risk for breast cancer, or they continue to believe myths like underwire bras cause cancer (they don't).

Once women are educated, they need screening at the appropriate time.  And if they’re diagnosed, they need access to care, where treatments developed through research can help them.  Many women and men also need some help getting through their treatment, and they need someone fighting for them.

That’s why we fund all of it: research, education, screening, treatment programs and advocacy work."

And it's true, Komen does fund all of it. But $135.5 million for Education?  Almost double the amount allocated to the Research program? $135.5 million sure seems like a lot of money.  How much of this figure is actually spent on Education? 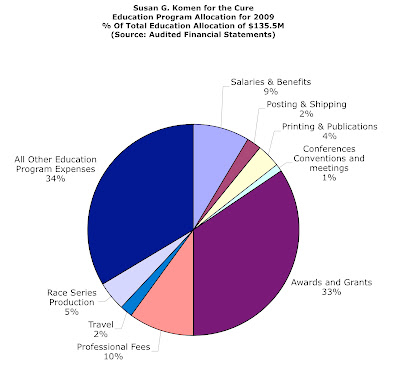 Indeed for the entire six year period from 2004-2009, the average percentage spent on actual Education awards and grants was only 37% of the total Education allocation, with the remaining 63% spent on Education program operating expenses.

What does Education Entail?

The ostensibly high Eduction program operating expenses may be partially explained if Komen is producing much of its Education material  and programs in-house which might include brochures, audio-visual resources, other breast cancer educational information, upkeep of the Komen website, in addition to awarding grants to outside organizations.

There is clearly no debate that Komen is fulfilling it's priority to "educate" the public about breast cancer.  But I have to question whether the $135.5 million  Komen spent on its Education program in 2009 represents value for money for it's many, many donors.

After all, we can educate about apparent risk factors; so-called prevention measures like exercise, healthy diet, lifestyle factors and so on, but for so many women who have been diagnosed, these factors do not sufficiently explain their breast cancers.  We can educate on the advantages of early detection, but there is no medical certainty that a woman won't experience recurrence or metastasis in the near or far future.   We can educate about the importance of self-examinations and mammograms, yet these screening methods are no guarantee that a breast cancer tumor will be detected.  We can educate women about available treatments, but this is no substitute for game-changing research and the scientific facts that women need in making decisions about their treatment options.  Research is still lacking in all of these areas.  We are educating the public about a disease that has no cure and for which our knowledge is still extremely limited.

Why does Komen continue to pour money into breast cancer education and awareness programs, at ever-increasing rates and at the expense of research which could potentially alter the course of our breast cancer epidemic? Why we do have hundreds of breast cancer organizations producing the same educational information, all incurring their own costs in doing so,  and decreasing the overall funding pool available for potentially life-saving research?  When are our nation's largest breast cancer fundraisers going to realize this duplication of efforts with respect to education is, quite simply, a colossal waste of money?  When are our breast cancer fundraisers going to realize the economic synergies of sharing and integrating their Education programs?
I'm not saying that breast cancer education isn't an important facet in dealing with this disease epidemic.  But all the education in the world is never going to provide us with a cure or the kinds of treatments that will allow us to live long and productive lives.  I'm simply questioning whether there is a better and more economically efficient way  for our breast cancer charities to fulfill their breast cancer education missions.
For that to happen there needs to be a spirit of cooperation and a common goal that is neutral to the spoils of corporate partnerships, sponsorships and other business incentives.  The $542.5 million spent by Komen on its Education program from 2004-2009 sure is a lot of money for us to be getting our priorities wrong with respect to this disease. 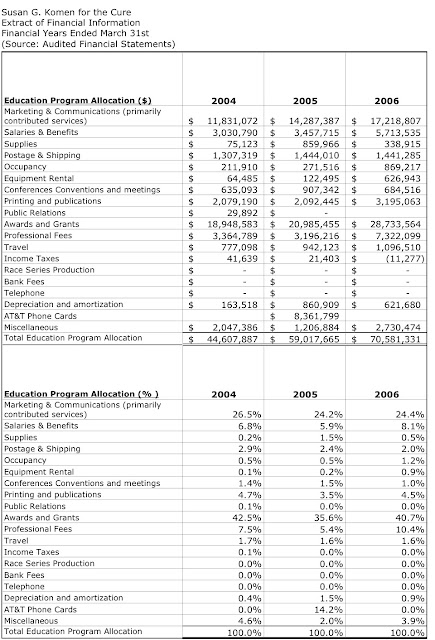 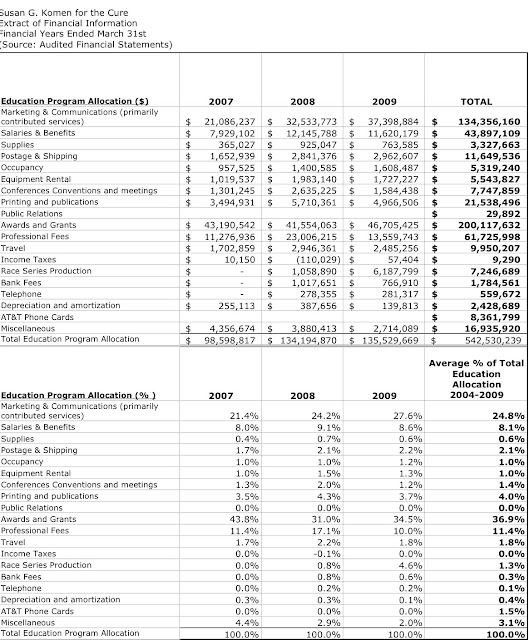 Posted by CancerCultureChronicles at 7:04 AM