Komen By The Numbers: The Context of Research

Context: the parts of a discourse that surround a word or passage and can throw light on its meaning.

Context is an important word, particularly within the cancer culture.  We hear those three little words; "You have cancer", and immediately we are thrown into a frightening void, where often the first battle is understanding the world into which we have just been forced.  After shedding our tears, and numbing ourselves to the shock and pain of it all, we take a deep breath and start asking the questions we are supposed to ask.  After we have figured out which questions we need to ask.  Soon we begin to understand this new context.  Our diagnosis, options for treatment, and how our lives will be irreparably changed. Context provides some comfort in the form of clarity, but we can't get there unless we ask the relevant questions.

It is with this in mind, that I continue my investigation into the activities of our nation's largest breast cancer fundraiser, Susan G. Komen for the Cure® ("Komen").  I still have questions.

In my recent essay, "Komen By The Numbers" , I analyzed the available audited financial statements for Komen for the six year-period for financial years ending March 31st, 2004 through 2009.  I calculated Komen's total Net Public Support and Revenue for that six-year period; $1.54 billion.  I then calculated the total allocations to Komen's "Program Services" for the same period.  Allocations were made in the following proportions, expressed as a percentage of total Net Public Support and Revenue: Research 25%; Education 35%; Screening 11%; and Treatment 6%.  The remaining 22% was used for Fundraising and Other Administrative Expenses.

I also investigated the types of research funded by Komen and determined that, according to information provided on their website, from 1982 to 2010 they have awarded research grants to the tune of about $491 million. Using the total research figure of $491 million and other ratios, I estimated that from 1982-2010, Komen has received some $2.1 billion in Net Public Support and Other Revenue. Types of research are expressed as a percentage of the $491 million:  Biology 33%; Treatment 22%; Early Detection 15%; Prevention 10%; Survivorship 9%; Etiology 8%; and Model Systems 3%.

In this essay, I drill a little deeper into Komen's Research program.


"Since funding its first research grant in 1983, the organization’s commitment to research has grown at unprecedented rates."

Is it fair to say that Komen's research allocations have "grown at unprecedented rates?"  The best way to tell is to look at Komen's available audited financial data to see the changes that have occurred over time.

Here are the dollar amounts of Komen's Net Public Support and Revenue, compared to Program Services and Other Expenses allocations, from 2004 to 2009. 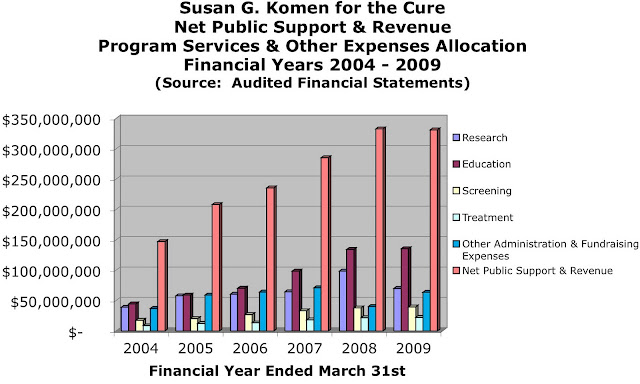 To determine which of Komen's programs have indeed grown at "unprecedented rates" it is important  to understand how each of the Program Services are allocated  when expressed as a percentage of the total Net Public Support and Revenue over a period of time.  The following chart tells a very different story. 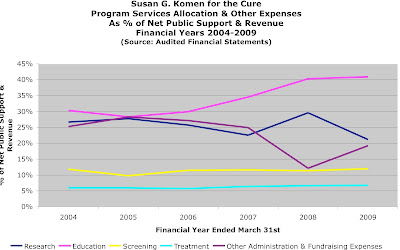 By comparison, the percentage allocation to the Research program (navy blue line) has barely changed since 2004. In fact, it seems to be on a slight downward trajectory except for a blip in 2008.  In 2004 Komen allocated 27% to Research, and this dropped to 21% in 2009.  Over the six year-period,  total monies allocated to Research were only 25% of the total Net Public Support and Revenue. This does not indicate "unprecedented growth."

Such statements are meaningless unless the context is understood.  How do these research amounts relate to the amount of Net Public Support and Revenue Komen earned in each of those years? Further, how do they compare to the amount spent on the Education program in those years?

Komen states that they are providing $60 million to research this year alone, which sounds like a lot of money, especially when compared to the $28,000 invested in 1983.   Komen's 2009-2010 financials are not yet available on their website. But if history is a guide, the organization probably earned in excess of the $331 million in Net Public Support and Revenue that it earned in 2009. Based on this estimate, a Research investment of $60 million would amount to about 18% of Net Public Support and Revenue.  When viewing the $60 million research allocation in the context of Komen's full financial situation, this investment sounds a lot less impressive.


"Beginning in 2008, Komen’s chief scientific advisor, Dr. Eric P. Winer, and the organization’s Scientific Advisory Board initiated a strategic shift in the focus of Komen research to translational studies that would contribute to significant reductions in breast cancer mortality and/or incidence within the decade."

Now for anybody who's not aware, "translational studies" refers to research that "...transforms scientific discoveries arising from laboratory, clinical, or population studies into clinical applications to reduce cancer incidence, morbidity, and mortality." (See National Cancer Institute for more information).

This all sounds quite promising, but what does it mean for Komen's Research program allocation? Since this new focus began in 2008, it may be too early to draw any conclusions from the financials, except to note that the 21% allocated to the Research program in 2009 is lower than each of the five years previously.  Is this what Komen really means when they talk about a "strategic shift" in their research policy? That there will be less money allocated to Research even as Net Public Support and Revenue continues to increase?  I certainly hope not, but I'll be watching the numbers closely as they become available.

In performing these analyses, it's been my intention to answer the many questions that I have about Komen's policies and activities.  There is too much money at stake, and there too many clocks ticking for the women who are currently living with breast cancer, and too many women yet to be diagnosed.

If I invested in the shares of a public company, it would be within my rights, as a shareholder, to question that company if I had concerns about their operations and how my investment was being spent.  As a past donor to Komen, and as someone living with metastatic breast cancer, I am a stakeholder for whom the Komen organization looms large in the fight to end breast cancer. I maintain my right to ask reasonable questions of the Komen organization.  I need an investment in a cure, and sooner rather than later.  This is my context.
Posted by CancerCultureChronicles at 10:06 AM