What could be worse than a 27-hour return train journey turning into a 40-hour odyssey and then getting lost in Newark Train Station at two o'clock in the morning?  I'll tell you what.  Our glorious week long vacation from our problems in a tropical paradise coming to an end, that's what!

Where to start?  First, the train journey.

As you know I ended up having to take a train down the east coast to Miami under orders from Dr Cuteness.  Everybody immediately equates long distance train travel with romance, goodbyes to sweethearts, handkerchiefs waving from the windows, and wires home announcing one's safe arrival (thanks KOB for this vision!).  However any thoughts of romance were quickly dashed when I was confronted with my substitute home for the next 27-hours.  Now don't get me wrong, the sleeping accommodations were perfectly acceptable.  It was just the ablutions setup that I had a problem with. Yes. Right next to my bed.  No division here whatsoever.  I think the dogs have the theory right in this regard.  Never eat or sleep where you....ahem....toilet!  Okay, okay it was still better than the setup in coach.  One toilet for how many passengers?

The trip down went pretty smoothly and I quite enjoyed going to the dining car to take my meals on the plastic Amtrak china, and also reveled in the potluck of table companions one was assigned to.  The two elderly spinster sisters whom I mistook for a pioneering lesbian couple from New Jersey were a delight on the first night.  On the way home I ate breakfast with a heavyset man from Philadelphia who told me how much he enjoyed vacationing in spots that espoused "family values".  I took this as my cue to keep my talk of atheism, pro-choice and women's rights in general to a minimum.

Then the inevitable question.  "So, are you winning your war?" It really was too early in the morning for this and I was honestly confused.  War on what?  My personal war on what is really meant by the phrase "family values?" "You know, your health WAR."  Oh.  Buzzkill alert.  "Because I'm a strong believer in positive attitude and the metaphysical, and I can tell just by looking at your face that you're winning this war.  By the way my friend had IT and he died after only seven months."  Nice.  Oh for the love of all things family values.  Fortunately my sheer physical exhaustion and need to shovel more food into my mouth saved this rather sweet man from having his head bitten off in a bloody attack befitting a scene in the movie, Wolf Creek.   "Excuse me, I need to use the bathroom next to my bed.  Enjoy the rest of your trip sir."

I think I'll summarize my experience of this train journey by divulging some Golden Rules of sleeper car train travel.

Rule #1:  Before attempting to use the toilet next to your bed, check that all curtains are closed and tightly secured.  On BOTH sides.  Don't want to give those folks at West Palm Beach train station a show they didn't pay to see, now do we?

Rule #2:  Unlike Flight Attendants, Sleeping Car Attendants expect to be tipped.  Despite being government employees.  Despite not doing much for you at all the entire 40-hours you were stuck on train.  And despite having the attitude of someone who would do well as an employee of a state-run operation in Cold War-era Siberia.


Rule #3:  Don't arrive at Newark Train Station in the dead of night.  But if you do, don't leave that train station without having some compassion for the plight of the homeless and mentally ill in this country.  I literally had to step over bodies in and around that station.  More frightening to me than the people themselves are the policies that seemingly ignore their plight.  Horrifying and disgraceful.

I apologize for the vaccuous segue, but now for the vacation itself, perhaps better described with visual aids: 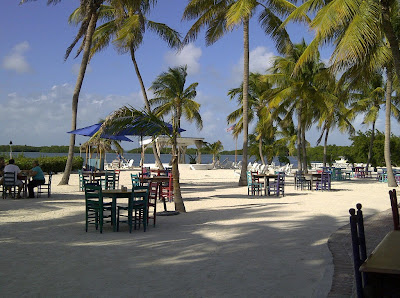 This is the cafe' across the street where we dined most nights, and were usually serenaded by some kind of live reggae music or cheesy tropical-themed muzak. 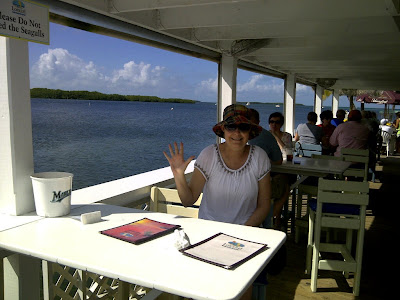 This is where I liked to go and gorge on conch fritters and virgin beverages.  Virgin mojito's don't disappoint by the way.  We were generally joined at some point in our meal by a gimp stork named Hoppy. 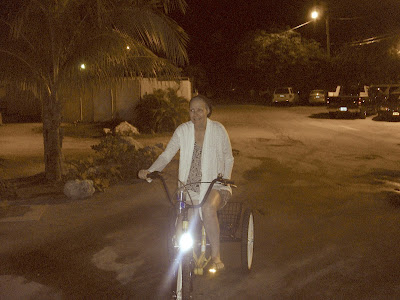 This was my "whip" of choice in getting around the whole entire week.  Since I now have a gimp hand, I can't ride an ordinary bicycle and nor could I balance comfortably on a tandem.  The manager at our accommodations rang around to all the local bike places and was able to locate this adult tricycle for me.  I actually received many envious compliments whilst riding it, and this particular night everyone in our party had a go riding around the parking lot, giggling like little children. 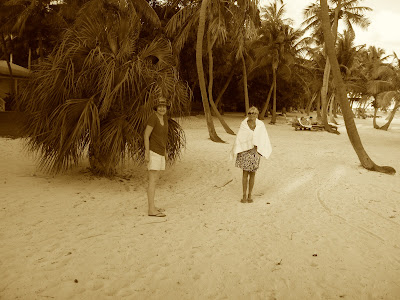 This was the beach where Beloved and I spent most of our time reclining on deck chairs and staring out to sea or up at the blue sky through the coconut palms.  Actually this beach is rather famous in that it is the set for many fashion photo shoots and it's also featured as an official screen saver.  That's my MIL in the background.  By the way I sepia-toned this photo to take the glare off my white legs. 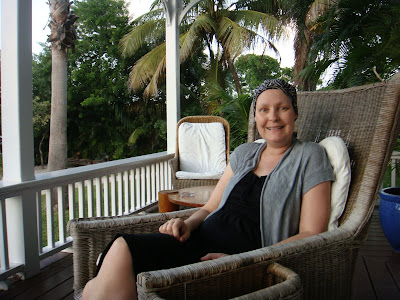 Every night we went to this bar to sit on the porch,  watch the sunset, drink virgin cocktails and muse on why we live in New Jersey.  I like this photo because I don't look like an extra from The Walking Dead. 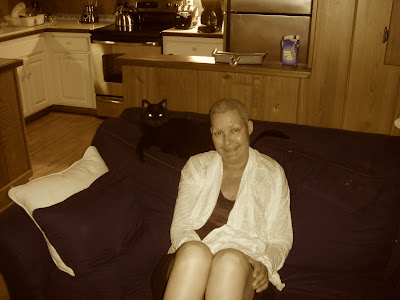 This photo was taken inside our cottage.  The Florida Keys are under siege from stray cats and our holiday village is no exception.  The cats on this property are well cared for, spayed and available for adoption by guests.  Rosie the cat adopted us for the week as we were staying in HER cottage.  On the last night we relented and let her come inside, where she promptly positioned herself at my head.  We really enjoyed her company and so wanted to bring her home with us, except my naughty little dog hates any species not of his own kind.  Plus I think she's happier roaming free in her tropical paradise so we'll see her next year, same time, same place. 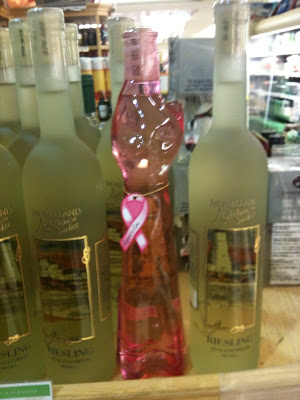 And last but not least, what vacation from cancer would be complete without some reminder?  This one in the liquor aisle at the local supermarket.  Because that's what I really want to do.  Drink pink breast cancer wine from a cat bottle and "support the cause".  Miaow!


*********
In summary, this was the most wonderfully relaxing and lovely time that Beloved and I could have hoped for, and was totally worth the 67-hours in train travel it took to get there.

We need more weeks like this.
Posted by CancerCultureChronicles at 2:09 PM