The day has finally arrived and I'm so excited!  I am going on vacation from cancer!  Literally and figuratively.

We have an annual tradition of spending the week of Thanksgiving in Florida with Beloved's family, and we have a standing reservation at a lovely little holiday village in the Florida Keys.  Given my track record for the year so far, littered with cancelled vacations, and my seemingly perpetual state of medical instability,  I was really worried that this trip was going to go the same way as the others.  Cancelled!

But, no!  I am actually going and my bags are packed.

Okay there was a slight hiccup with the recent collapsed lung episode.  Dr Cuteness, in his adorable way, did declare a no-fly zone for my lung for at least a month.  Eegads, we really had to scramble to figure this out.  Driving was out of the question, as Beloved couldn't extend his vacation time, and quite frankly the thought of spending 24 hours driving down I-95 is about as appealing as having a surgical intervention for a collapsed lung.  Plus I have serious doubts as to Beloved's ability to pay attention for that long.  So what to do? 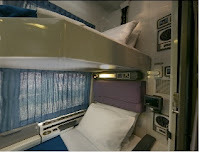 Well folks, I'm turning the travel clock back one hundred years or so and will be traversing the east coast all the way to Miami on the train.  For all twenty-six fun filled hours.  Actually I'm rather looking forward to it.  I managed to book the last sleeper compartment on the train so at least a third of the ride will be spent snoozing, and as for the other eighteen hours?


And once I get there, I'm planning on eating a crap load of conch fritters.  Deep fried and delicious particularly when consumed on a warm sunny day with a view of the ocean.

Feelings of bliss and excitement for the first time in a very long time.

What's your next vacation? Or staycation? What are you doing for Thanksgiving?
Posted by CancerCultureChronicles at 10:51 AM