Komen By The Numbers: 2010 And Still No Answers

Stewardship: the conducting, supervising, or managing of something; especially : the careful and responsible management of something entrusted to one's care.
In September 2010, Susan G. Komen for the Cure® ("Komen"), proudly announced they had received a four-star rating from Charity Navigator, a popular charity evaluator whose reports are accessible by the general public.


“Achieving Charity Navigator’s highest rating for fiscal soundness is an incredible achievement for even one year during these economic times,” said Ambassador Nancy G. Brinker, Komen’s founder and CEO. “But to garner this rating four consecutive years is a true testament to the hard work of our entire Susan G. Komen for the Cure family. My gratitude also goes out to our Affiliates, our volunteers and our staff, who have proven once again to be responsible stewards of our contributors’ money as everyone continues to try to fulfill our promise of saving lives and ending breast cancer forever.”


"By utilizing our ratings, givers can truly know how a charity's financial health compares with other charities throughout the country. Givers can be confident that in supporting those charities rated highly by Charity Navigator, they will be supporting organizations that are fiscally responsible and financially healthy."

This all sounds very nice, but what does all this really mean?

In the case of Komen, the award of a four-star rating tells us that it is a highly-rated fiscally responsible and financially responsible organization. Not whether it lives up to its mission, aligns its programs and allocates funds to its mission, buries overhead within program budgets, uses evidence-based practices, etc. In essence, the ratings say nothing about how effective Komen has been in fulfilling its mission of "saving lives and ending breast cancer forever". These are fair questions and should be part of any independent evaluation. To say that an organization is "efficient" and has "capacity" says absolutely nothing about whether an organization is doing right by its donors, nor the cause(s) it purports to aid. And it should.  Although, if one bothers to read the methodology  statements on Charity Navigator's website, it states that a "..limitation to our ratings is that we do not currently evaluate the quality of the programs and services a charity provides." This seems like a pretty important omission in the ratings system to me.

Indeed, it was recently reported by Information Today, Inc. that Charity Navigator is adjusting its ratings to respond to such limitations;

But Charity Navigator doesn’t have the resources to hire staff to review 5,500 charities and therefore must find cost-effective ways to evaluate them. It will train an “army of volunteers and graduate students” to evaluate charity’s effectiveness, says CEO Berger. Its new rating system will be based 33% on financial health, 17% on accountability, and 50% on results, though it hasn’t made it clear how it will judge results."

So how "effective" is Komen?  Given that breast cancer remains incurable;  breast cancer mortality rates have remain unchanged in decades;  early detection does not guarantee that anyone will avoid metastasis at any point after diagnosis; available treatments are of questionable efficacy; acceptable screening methods and their effectiveness are still being debated; and awareness and education programs have yet to prove that anyone can escape diagnosis in the first place, Komen's "effectiveness" rating in my book would be not very.

But will Charity Navigator concur when they update Komen's ratings under their new evaluation system? What will their indicators of an organization's "effectiveness" consist of? Perhaps effectiveness criteria* for a non-profit like Komen might include;

In judging "effectiveness" close attention should be paid to an organization's financials, to see how it's spending ties with it's mission.  In previous instalments of this series (Komen By The Numbers, The Context of Research, and Education In Focus) I have analyzed Komen's financial statements to make my own judgements about how "effective" Komen has been in spending it's precious resources.

Komen recently released audited financial statements for the financial year ended March 31, 2010, and today I continue my evaluation of how Komen's spends it's donors funds. 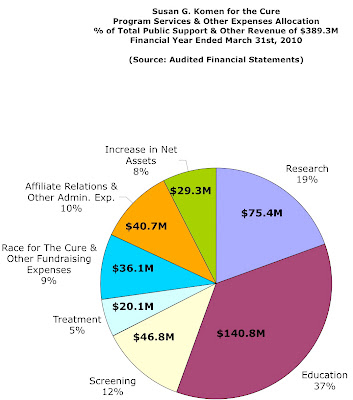 The second chart, compares the results of 2010 in total dollars to all prior years for which financial statements are available from Komen's website. 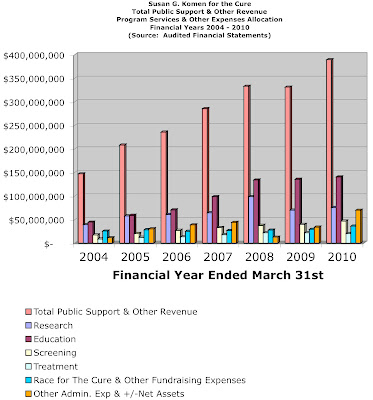 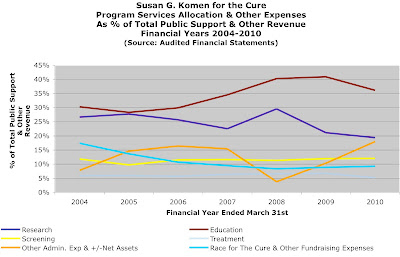 Analyzing further the financials for Komen's Research program, I find that from the $75.4M allocated to the Research program, that only $62.7M was spent on actual research awards and grants with the remaining $12.7M spent on Professional Fees expense of $6.3M; Salaries and Benefits of $2.8M; and other Operating expenses of $3.6M.

To recap; although the Research program was allocated 19% of total revenue only 16%  of total revenue was used to fund actual research!  And why the need to spend $6.3M on Professional Fees expense, which is generally fees like accounting, legal, public relations, financial management etc.?  16% to Research is significantly less than the 25% Komen repeatedly claims is used to fund research.  And the annual Research program allocation percentage, when compared to total revenue, keeps decreasing!

These types of line-item expenses buried within all of Komen's Program allocations are not captured in detail in the high-level "Program Expenses" as reported by Charity Navigator.  Although it is feasible that charities do incur expenses directly attributable to their Programs, and are correctly reported under each Program budget allocation, Charity Navigator's ratings make no judgements as to whether such expenses buried within the Program Allocations, are in fact reasonable.  If all Administrative Expenses and Changes to Assets were tabulated, regardless of the Program budget to which they related to,  for 2010 actual awards and grants across the Research, Education, Screening and Treatment Programs accounted for 40% or $156M of total revenue of $389M. The remaining 60% of revenue or $233M was spent on Administrative Expenses (about 18% for General Overhead and Increases to Assets, and about 42% attributable to Program Expenses).  Again I ask, is this reasonable?  What do we have to compare to?

Perhaps this is another criteria for Charity Navigator to consider when establishing their new ratings system.  How do the level of administrative expenses buried within Komen's Program allocations compare to other similar charities? How much does it cost to run a Research Program?  An Education Program?  How much is Komen doing in-house? How much are they out-sourcing?  Until we understand the answers to these and other questions, a four-star rating doesn't mean much in my opinion.

How can Komen continue to justify it's position on Research and honestly think that it's living up to it's mission of "saving lives and ending breast cancer forever”? From its financials, its mission seems to shout Education.  Not curing breast cancer. Are Komen really being "responsible stewards" of their contributors money? Has Komen been "effective" in the way it has spent the estimated $2Billion it has raised since 1982?  NO.
Posted by CancerCultureChronicles at 11:34 AM