My little patch of hair is falling out again. Again! Seriously, how many times can a person's hair fall out in the space of a year? I hope you're keeping count, because I've lost track.

This past week has been, shall we say, interesting. It seems fitting that I spent Monday, the last day of Pinktober, at Pinkbank Hospital being investigated for mystery shortness of breath.

I started off in the cardiac unit for an echo cardiograph, but was sent packing when they couldn't find my heart on the scan. Somewhat troubling and almost laughable. The techs parting comment to me was something about implants hiding the heart. Damn those pesky reconstructed breasts!

Then I was shunted off to receive a chest CT scan, where I was greeted like an old friend by the radiology nurse who came to access my port, so that I could be shot up with radioactive dye. It's also troubling when everyone in the hospital seems to know you. Obviously I've been spending way too much time there.

Then the news. You have a pneumothorax (partial collapsed lung) and we're taking you down to the emergency room now. Great. Here we go again. Cue the waterworks.

Pull up to emergency room desk. Me in my wheelchair sobbing. Radiology nurse clucking attentively. Emergency room desk receptionist dressed in bright pink breast cancer awareness sweatshirt and pink ribbon lanyard. Rather than taking pity on me, as I would have expected from someone who was so aware of breast cancer, and on the last day of Pinktober no less, the bitch (it's the only fitting descriptor) couldn't have cared less, and rudely waved us on to the next receptionist.

It was at this point that I stopped crying, and almost burst out laughing at the irony of the scene.  Has the color pink simply become a proxy for giving a shit? Wasn't I the point of her stupid sweatshirt? Wasn't I entitled to some special pink treatment during my special pink month? What's the point of having breast cancer if you can't jump the ER queue at least because someone's AWARE of you? Perhaps it was my fault. Maybe my chart wasn't clear enough. More the fool me for forgetting to wear my pink feather boa, bedazzled pink fedora, and Fight Like A Girl t-shirt.  End facetiousness.

Finally my old friend Dr Cuteness arrives. Mother-in-law almost swooned. The man is seriously handsome. But I managed to focus and listen to what he was saying and after a long discussion we decided against an immediate surgical intervention. Let's see if this thing reflates on it's own. Come back on Wednesday for a chest x-ray, and if it hasn't improved then I'll meet you in the operating room.

Luckily, my date with Dr Cuteness in the operating room hasn't yet come to pass. So far the lung is behaving and I've managed to avoid surgery. I'm not out of the woods yet, but at least headed in the right direction. 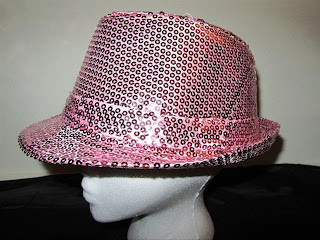 Posted by CancerCultureChronicles at 4:12 PM