Winning? By Whose Playbook?

Nancy Brinker, CEO and founder of one of the largest breast cancer fundraising organizations, resplendent in a pink pantsuit, recently addressed a crowd of 1000-strong at the Susan G. Komen for the Cure Affiliate Leadership Conference in Fort Worth Texas.  As reported by the Star-Telegram;


Brinker said that during her travels she is most often asked whether the war on breast cancer is being won.

"You bet we're winning," she said. "The five-year survival rate has increased from 74 percent in the 1980s to 98 percent today."

Firstly, I have addressed this often quoted "98 percent" statistic in a previous post, so I'll say no more about it, except that I believe it's a misleading, erroneous, arrogant and dangerous position to take, by the self-styled global leader of the breast cancer movement.  (Click here to read my views on this statistic).

Nope the real clincher for me today is the statement, "You bet we're winning".  Really?  By whose playbook?

It sure didn't feel like I was "winning" when my dinner-and-a-movie-Friday night turned into a nightmare of epic proportions, starting with me being wheeled to the emergency room on Friday afternoon following a big-time fail on a heart test.

Everything happened very quickly, but during my couple of hours in the ER, I was seen by at least five doctors, and the decision was made to operate on me that evening.  By 6pm I was kissing my beloved goodbye, trying to shout instructions about what to do with my body if I didn't come through the operation, and being wheeled into the operating room, having received an emergency slot at the expense of some other poor soul who was bumped to accommodate me.

To cut a long story short, it turns out that I was walking around most of last week with a ticking time bomb inside of me.  My heart had filled up with fluid and I had some breathing difficulties as well as some other uncomfortable symptoms.  In medical parlance this is known as a Pericardial Effusion.  It's a serious situation and if left untreated can cause heart failure and death.  To put some perspective as to how bad my situation had become my surgeon put it like this.  The normal heart sac holds about 30cc of fluid before it's "full".  My heart sac had 1000cc of fluid by the time I got to the operating table. 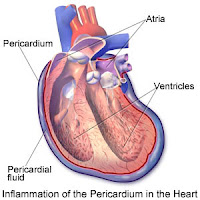 How did it get this bad you ask before we caught it?  I'd been having some symptoms like fatigue, stomach ache, feeling a bit full, and a bit short of breath.  But of course I never connected the dots, thinking it was all just the usual cornucopia of mystery side-effects from chemo, and since my blood pressure never dropped I guess everybody else missed the seriousness of the situation until I showed up for the echocardiogram on the Friday.


So in order to treat me, the surgeon went in around my sternum, cut a small window (or a Pericardial Window) in my heart sac, and then inserted a drain, drained off the 1000cc of fluid, and the drain was left protuding out of my chest to let remaining fluid drain into a plastic box that was left at the foot of my bed.  I spent the night in the Intensive Care Unit hooked up to every beeping machine ever invented.  Late Saturday afternoon I turned a corner and I was taken off the machines, untethered from the IV's and sent to the general oncology ward to continue my recuperation.  My stay in hospital was dependent on when the fluid stopped flowing, and the drain could be removed from my chest.  And of course that I could walk further than 6 feet without feeling like I was about to be taken by the Great Pink Spirit in the Sky.

Why did this happen?  I'm not yet willing to speculate publicly on the causes of this particular nightmare as I'm still waiting on the pathology report.  However I think it's fairly likely that this is cancer-related in some way.  How sinister is yet to be determined.

My point in relating this story is two-fold.  One I'm talking about it, so I guess I'm dealing with it.  But two, this IS cancer.  It's sneaky.  Just when you get comfortable and think you know where you're headed, something like this appears out of nowhere and shakes you to the core, making you forget everything you thought you knew about your particular cancer beast.  One minute you're thinking "I can do this", "I'll get through this", to all of a sudden "Shit I really might die, and maybe sooner than I think".  That's cancer.  It's cruel.  Plain and simple.

And for Nancy Brinker to stand up on a stage and proselytize to her deluded evangelicals that "You bet we're winning" seems to me to me to be at best, an extreme error in judgement and at worst,  self-serving and just plain cruel.

Who of these people would so flippantly say "You bet we're winning"?

Posted by CancerCultureChronicles at 10:35 AM