For The Cure, Or Not?

The following print advertisement appeared in the January/February 2012 issue of the Brown University Alumni magazine.  Beneath the title, which read "Every 74 seconds a woman dies of breast cancer", was the following text:

The first item that struck me, in the above advertisement, was the logo.  Where's their famous strap line, "for the Cure"?  Compare to the logo at left that currently appears on Komen's website.

Does the dropping of the strap line represent yet another rebranding effort for the Komen organization?  Are they seeking to take the emphasis off being for the cure, in order to lower the public's expectations and avoid the criticism by the likes of the "Grumblers" with respect to Komen's spending priorities, specifically the relatively low amount allocated to research?

If this omission of the strap line does indeed represent a rebranded logo, then I have to wonder where the last thirty years and over $2 billion of funds raised actually went?  Is Komen finally admitting that funding research will never be their top priority, and that a reach-for-the-stars strap line is simply not delivering the kind of success metrics donors and the public alike might be starting to look for?

As I said I don't know if this a rebranding exercise.  Or whether Komen just picks and chooses which logos to use depending on the publication, but I'm keeping my ear to the ground on this one.


Next I looked at the text of this advertisement, which, as usual,  is full of decontextualized factoids and sound bites.

To this factoid I say, so what?  Is the number of breast screenings the metric which Komen uses to define its success in early detection? Wouldn't a better metric be the number of deaths that were prevented as a direct result of screening and so-called early detection?  Trouble is, this kind of metric could only really be proven if the person screened ultimately died of something other than breast cancer, and would require a long-term research study.  As we know, people who are diagnosed early can still go onto develop metastatic breast cancer.  In fact, I personally have met a number of women, originally diagnosed at Stage 0/I, for whom this happened.

Recent studies have suggested that breast cancer screenings can result in a 20-30% reduction in breast cancer mortality rates.  But as Gayle Sulik, author of Pink Ribbon Blues aptly points out;

If the reduction in mortality is only 30 percent or less depending upon the country, the context, the follow-up, the level of expertise of providers, and the individual profiles of the women (and this is a short-list of just a few caveats), then what are we doing for the remaining 70 percent? [Editor: Emphasis added]

For the world's largest breast cancer organization to crow about 700,000 screenings without providing relevant success metrics is simply not good enough.

"We helped 100,000 people financially through treatment"

In 2010, Komen spent about $20 million or 5% of their budget on treatment.  For 100,000 people helped, this equates to about $200 per person.  Whilst any money is good money to those in need, realistically $200 would pay for about fifteen minutes of consultation time with an oncologist.  I've been in treatment since 2004.  My first year alone, I paid close to $10,000 in charges that my insurance didn't cover.  What if I didn't have insurance?  $200 would be nice, but it certainly wouldn't even scratch the surface in terms of financial help for treatment.

Given that poverty has been associated with higher cancer mortality, I would argue that treatment assistance should be much higher in Komen's spending priorities, not the lowest as it currently is now.

"We educated millions about breast cancer" 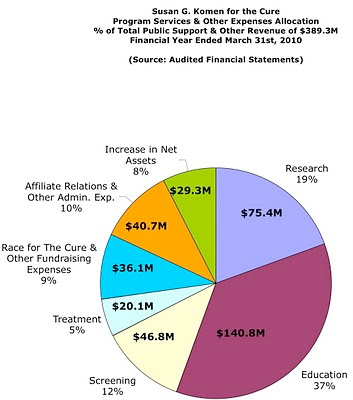 Compare Education spending to their other allocations.  Extraordinarily high.

"We invested $66 million in breast cancer research and related programs"


It's interesting that this is the only dollar amount mentioned in the ad copy.  And yes, $66 million is a lot of money, but when compared to Komen's total revenue of $389 million in 2010* , and the amount spent on education, it's clear that research comes up far short in terms of priorities.

And perhaps more so in the future if Komen is indeed no longer interested in being for the cure as the ad logo would suggest.

* Note that 2011 financial statements are not yet available.


************
Given Komen's relentless pursuit of the almighty dollar, and its almost megalomaniacal status as the world's leading breast cancer organization, is it not time for Komen to be more transparent about where it's future priorities lie and how it evaluates it's success?
Don't we, as the donating public, deserve better?
Come on Komen, what's your plan for the next $2 billion, and if you are no longer for the cure, then what are you for?
Posted by CancerCultureChronicles at 12:31 PM